Last thursday we had our 5th Milestone where we were finally able to show the horizontality of our project.

On the electronical side, the PCB was finally received and mounted. The tests are in progress. Regarding software development, the Bluetooth characteristics were implemented and a test code was built to work with other parts of the project.

On the IT side, the apps for the seller is still in the making, but the Bluetooth information can now be sent from the electronical part and can be transfered to the database server. The server reception has been working flawlessly. This means that all the parts of our system are starting to run well together.

The One-page website is now close to be finished and can already be visited at this address : http://core-chic.surge.sh/

From the mechanical point, the printing of the base of the scale has been executed, so we can now begin integrating all the electronical parts. As 3D printing takes a lot of time (due to school limitations), the cover part of the device has not yet been printed, though it is set to begin shortly.

Here a picture to illustrate the integration between the mechanical part and the electronical part. 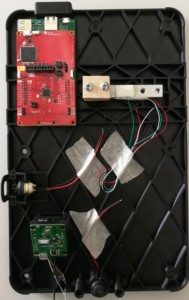 Have a good week and see you so soon!