Hong-Kong and Shenzhen, Here we are!

Hibachi team had arrived at Hong-Kong last week. It was intense! We pitched almost every day in front of different audiences: investors, companies, entrepreneurs, makers, students and other people. 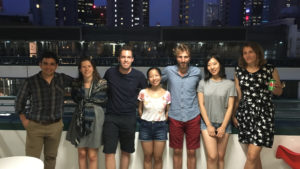 Our first pitch in front of HKUST Students was disappointed. They did not get our concept saying that « in Hong-Kong, we are not used to bring food with us. We have everything on the street and for cheap. Some may not have a kitchen in their apartment .» This first feedback punched us in our face.

Hong-Kong has a huge density of 6’500 habitants per km2 (more than twice Lausanne!). We tried to adapt our value proposition as well as our business model to get an interest from local people. We are exploring back our idea of Hardware as a Service. Our next pitch was the afternoon in an IoT accelerator named Brinc! After having received feedback from CHIC staff, we had tried other slides and scripts during the next pitches. Our last pitch was in front of investors at HKSTP (Hong Kong Science and Technology Park) was great. We decided to refocus on our original problem statement and to explain it clearly as well as our features.

Between pitches, we also visited companies, such as Panalpina (the 5th logistic leader) or Modern Terminals (the second-largest container terminal operator in Hong-Kong). You should definitely check our common CHIC blog for more stories about this incredible first week!

Yesterday, we arrived at Shenzhen called as the Hardware Silicon Valley, where we will give birth to our first Hibachi!

Right now, we have just arrived at Seeedstudio. 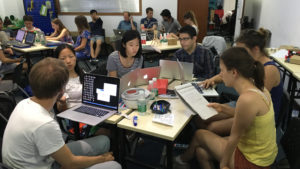 We are working back on our self-heating lunchbox. Our industrial designer and our firmware engineer are working on the mechanical design in order to print our first prototype. Our electronic engineer is checking the components that we have just received and comparing with our BOM – Bill of materials. Our Media Interaction Design is creating pictograms for the app. Others are preparing an important pitch in front of our next audience: HAX!

Last but not least, our businessman came across a lot of tupperwares and microwaves in the Seeedstudio kitchen during the lunch break. It appears that almost all workers of this office are used to eat at their desk during the lunchtime. Useful comments from HKUST Students seem to be limited to their environment or lifestyle. 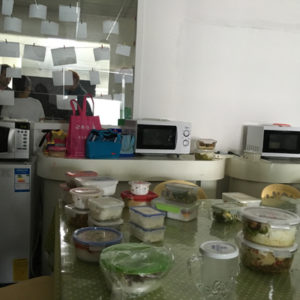 Customer interviews and observations are coming soon for exploring this new environment!