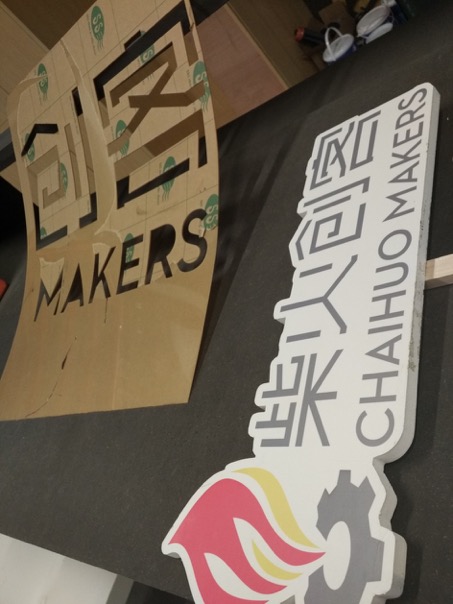 Thursday started early for some and later for others. The groups worked in different places on different tasks. The designers and most business people worked mostly at the hotel and the coffee shops around, while the engineers worked at Seeedstudio. Team Geneva rushed to Seed in the morning to make sure, the PCB in the fridge could not be damaged by anybody. They were not the only to struggle with the board. Team Fribourg did creative handwork on the PCB to make the inner life of Peggy work. The tools available at Seeed are limited to do the work required. The pick and place machine was missing and assembling the boards by hand is not something the teams were prepared for. Team Ticino succeeded to make their design one centimeter lower, which will allow the Air Aware pollution detector to be smaller. Serge Ayer, the supervisor of Fribourg supported the teams at Seeed. In the evening, the teams were all reunited at simply work for a pitch their projects. Despite the surprise that the time for pitching was reduced from 4 Minutes to 2 Minutes and the missing slides, the teams handled it very well. We are getting really used to talk in front of audiences. 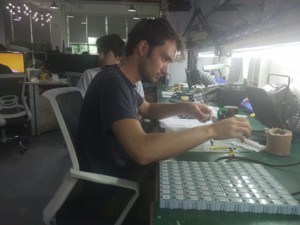 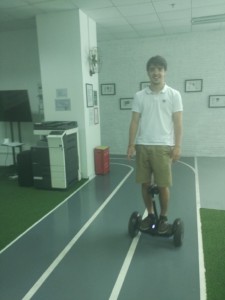 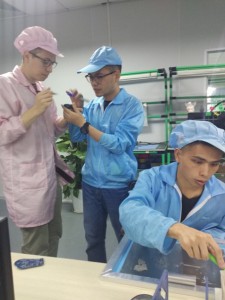 On the hot and humid friday morning, the majority of the CHIP group visited the Kingbrother PCB factory in Huizhou. Or, more precisely, in the middle between Shenzhen and Huizhou. It was a 1.5 hour drive between the Marco Polo hotel and the factory. Elle, our guide we met at Seeedstudio introduced us to Mr. Ting, who gave us an Overview about the Kingbrother factory. 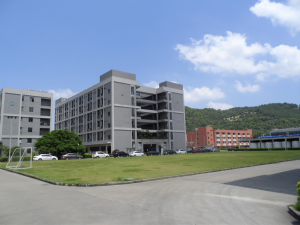 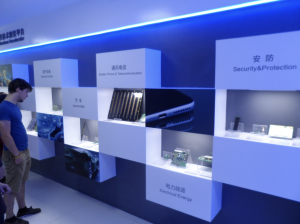 The Entrance area was nicely acclimatized and very appealing, with a museum area built in, that gave an introduction about PCB production and fields of application. After having inspected a range of interesting products, of which a robot that could dance to “Gangnam Style” was by far the most appreciated,

the group was guided towards the PCB production area, where it was – unfortunately, but understandably – prohibited to take photos. We tried to retain as good as it gets the information that was delivered during the tour, but the vapours and scents where not facilitating the information intake. As a general rule, PCBs (Printed Circuit Boards) mark the backbone of today’s electronics, allowing for connection between different components in a device. Just about any electronic device today is based on a PCB. They are constructed of layers of a non-conducting material with conducting lines of mostly copper, stuck together with epoxy resin. As the biggest challenge that Kingbrother is facing today, are special requirements for PCBs in special applications, like space or military.

After the production part was inspected, we proceeded with a company presentation by our friend Elle. Some information about Kingbrother:

-Number of employees in Huizhou: 862

For people who are interested: There are several delays for obtaining a PCB you would want to have produced. There is an extra fast 12 hour service, an express service within 24 hours, and the “normal” rate of two working days. The machines that are used are very modern, and they come from suppliers inside and outside China. Of course, acid vapours can be remarked in the production hall, but the overall feeling was that of a responsible workplace in the limits of the business and other factors.

The support engineers work in 3×24 hour shifts, to make sure that orders from every corner of the planet can be accepted. For the production workers, they usually work for 5 days a week, even though more is at least possible, for a salary rise, that seems to be welcome in many cases. The workers work alternately on every shift, so that a 24 hour production can be guaranteed. The office workforce is there on 5 days a week.

As a last part of our visit, we got to see the factory worker’s houses, at least from the outside. They seemed spacious for Chinese proportions, allowing for 4 worker’s per room, with rent at 300 Yuan per unit of 40 square meters equipped with AC, which is almost 50 CHF. Many Chinese production workers are living in places like this, far away from their origins and their loved ones, which they see for around 10 days per year on chinese new year.

On the way to lunch, we asked Elle what she thought about the visit, to which she said that the Kingbrother factory was better than she expected, and directly asked for our impressions in return, all in that impeccable Chinese fashion of saying only the necessary, but with unbelievable Charm.

In the evening we pitched in front of the x factory maker audience. All the pitches went very well and this time we could even show our beautiful new presentations the designers have created in the last days.