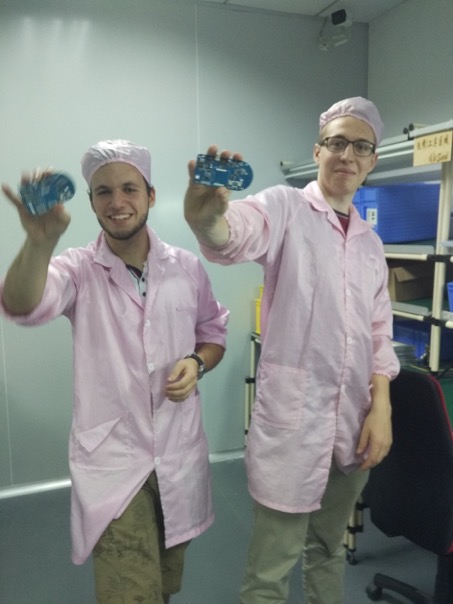 ShuQi is advancing despite all struggle. 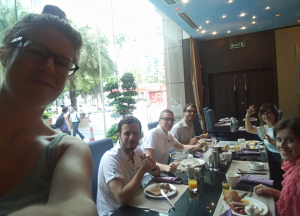 Initially the PCB posed a lot of issues: the stencil was had missing holes, so the soldering paste could not be applied for one component. To a business person’s eye, this might not seem a big issue, since there were eight tiny stripes, but the additional four horizontal stripes at the long end were missing. This is quite serious, since this component is tiny, and one small mistake can make the whole board not working. To follow the newest technologies and make our device as small as possible, our engineers do not use a predefined module like other groups, but they have designed the module on our ShuQi PCB. This is a praiseworthy effort of great engineering; however, it means, that the PCB contains 94 components.

The second challenge is the missing pick and place machine at Seeed. We were not prepared for this and assembling 0402 capacitors (0.4mm x 0.2mm) with a pair of tweezers is difficult. In the afternoon, Loïc our designer proved his good hand, for the millimeter small components. Thanks to the orderly component management, they placed all the components efficiently and in the evening, Loïc and Axel could pass one PCB into the oven. We were all relieved that after two days of struggle, there was finally one version, which had a slight hope to work. In the afternoon, despite all the information received, there suddenly seemed to be a pick and place machine. We agreed to go see it on Friday. 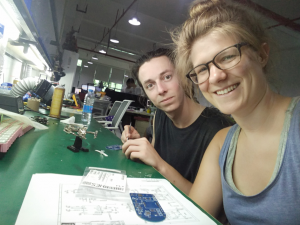 Friday brought several surprises. Not only did we have a funny story with every taxi we took, but also did the pick and place machine turn out to be different than expected. The taxi issue could always easily be resolved, even though Tabea does not speak perfect Chinese, combined with pleco (dictionary app) it is enough to talk to a taxi driver and get to the right place. Concerning the pick and place, when we finally got to the Seeed factory on Friday, we found out that the machine is only used for order of at least 50 boards. For non-engineers some explanation about the machine in concern. Electronic devices have many small components inside that make it work. These include the “brain” of the device, where calculations are done CPU; connectors to plug in a USB for example; an antenna like our RFID antenna; resistors that limit the current; capacitors that store the short-term current to smooth out fluctuations and integrated circuit that treat the signal. All of these components and others have to be placed somewhere and connected to each other. Et voilà: that’s why we have a PCB – printed circuit board. So now, to place the 94 components on a 4cm x 10cm board by hand is a challenge as we have seen. The pick and place machine can read a program, we write for it, and place the right component on the right spot without any shiver. Since you need to program the machine to do it, Seeed has a policy to assemble the PCB up to a quantity of 50 by hand. To make a long story short, the pick and place machine was very human, polite and spoke little English. We were fascinated by the precision and speed with which he assembled our PCB. In the evening, we were happy to welcome our 4 PCB from the oven. 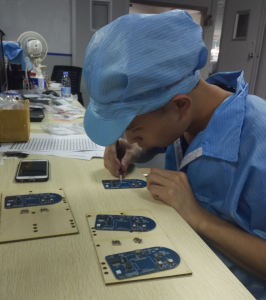 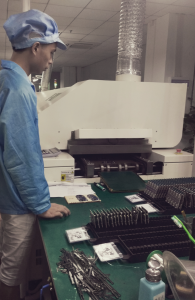