Hong Kong posses a really special status within the world but also regarding Mainland China. It is clearly separated from the nearest Chinese cities, like Shenzhen, by customs. In fact, if the entrance to Hong Kong is easy and does not necessitate excessive administrative processes, a visa is mandatory to go to china. Thus a clear frontier separate Hong Kong from the mainland china. If some aspects of this frontier directly come to mind such as the difference in money, language and culture, we could wonder what is the real extent of this border. Is the food safety also impacted and handled differently in the two opposite sides? If differences exist at the borders, are they the same when we consider the hygienic aspect of food or the nutritional one? Both are relevant when we speak about food safety: if the hygiene lead, in most of the case, in a short-term impact, a bad nutrition can lead to disastrous long term problem (weight problems, diabetes…). During our two weeks trip in Hong Kong and Shenzhen, we had the opportunity to investigate the similarities and differences about food safety.

At first sight, Hong Kong and Shenzhen seem quite similar. Maybe this is due to the dependant-like relationship between Hong-Kong and Mainland China. Because of its geographical situation, Hong Kong imports more than 95% of its food from aboard (1). Its main provider is Mainland China since the prices are relatively cheap and the geographical proximity allows a reduction in transportation costs. The consequence is that the food in Hong Kong is really like the one in Shenzhen. Especially the nutritional composition of the food is likely to be the same, and sometimes it appears not to be the healthiest. Even if all the packaging integrates the nutritional composition of the food, the traditional Chinese food incorporates a lot of oil and frying. In addition, people from both Hong Kong and Shenzhen frequently eat instantaneous pasta which incorporate too much salt, carbohydrates and lipids. 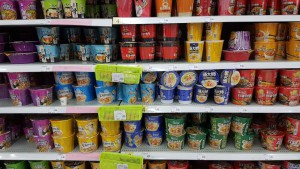 What appeared even more worrisome is the emergence of occidental fast-food: because of the presence of many foreigners, occidental food can be eaten everywhere in Shenzhen and Hong-Kong and MacDonald is widely implanted. It will surely not affect affluent people who can afford expensive and healthy food, but the poorest part of the population could suffer from excessive fast-food, especially since MacDonald is “one of the cheapest meal” in Hong Kong. In fact, the occidental food lifestyle is responsible of an increase of obesity in the rest of China (2). The other concern about food composition is the presence or not of pesticides and chemical products. Here again, because most of the Hong Kong Food comes from China, the problem is almost the same in both sides. Nonetheless, Hong Kong may appear stricter in term of the admissible limits and it then acts as an “hygienic filter”.

In both side of the border, the food safety concern seems present and even of growing interest. We found many government’s placards : in Hong Kong the Food and Environmental Hygiene Department (FEHD) and Centre for Food Safety (CFS) and in Shenzhen the FDA (U.S. Food and Drug Administration[1]) are present even in the MTR. In addition, every restaurant of Shenzhen is graded and classified within 3 categories: excellent, good and general. 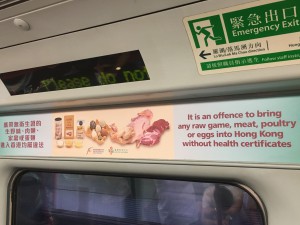 FEHD and CFS placard in the Hong Kong MTR. 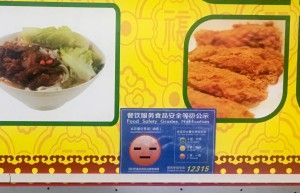 Notation of one of the Shenzhen restaurant

According to their grade, the safety visits will be more or less frequent. We even found recurrently webcam in Shenzhen restaurants’ kitchen to be displayed in the client dinning room. More anecdotally, in Shenzhen peoples wear plastic gloves when they have to eat something with the hand (it could be either to not dirty their hand or avoid hand’s bacteria).

When we look closer on the food safety, some differences may appear more or less clearly. As China is way bigger than Honk Kong, it seems obvious that the hygienic controls are more difficult in the mainland. Adding to that the fact that the number of farmers needed to feed the population is consequently huge, a unification is highly difficult to reach. In fact, the food safety system is centralized in Hong Kong whereas in China the responsibility is more complex to understand (1). In addition, even if some foreigners work at Shenzhen, most of them still live in Hong Kong because of the occidental-like lifestyle. It results in a higher concentration of foreigners in Hong Kong who are often more preoccupied by the hygienic standards (like we probably were). Thus the restaurants in Hong Kong may seem safer. In mainland China it happens that some foreigners are suspicious about food hygiene. When we considerate all the precautions evoked before: camera, gloves, notation, it may seem to be more a way to reassure the consumer than simple hygienic measures. In fact, from an European point of view, China is not reputed for its hygienic food condition, while, on the contrary, Honk-kong benefits from its special status. We even encountered a French expat in Shenzhen who went to the toilets to wash its chopsticks before the dinner started.

Another observation is that even the markets in Hong Kong are air conditioned and sustained by the FEHD, whereas in Shenzhen food street stands leave their meat under almost 40°C. 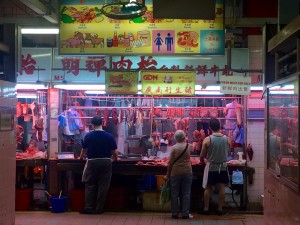 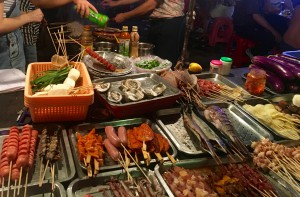 Thanks to the “one country, two systems” politic, Hong Kong currently benefits from a certain liberty compared to mainland China. As this politic is temporary, in the next years, the dilemma will be to accord the different systems and organisations for food safety. Comparing the efficiency of this two and the better food hygiene of Hong-Kong, China would certainly benefit from an application of the Hong-Kong food safety system. But would it be really possible to centralize the food hygiene organisms for the whole china? It would be even more complex to standardize the tolerances when not every Chinese feel concerned by the nutrition. Considering that food preoccupation decrease with the diminution of the revenue and absence of education (3), in the Countryside, where people tends to be poorer, the Honk Kong standards and obligation would probably be rejected.

In any case, if a visa is required to enter Hong-Kong after its change of status, the foreigners could be more reluctant to work in Hong Kong. In this case, as the food hygiene seems correlated to the number of expat, maybe the Hong-Kong standard will decrease consequently. If we add the fact that customs will no longer exist between China and Hong-Kong, the importation regulation will probably be more complex. Only the future will tell if that suppositions are true.

[1] The mission of FDA’s China Office is to strengthen the safety, quality, and effectiveness of food and medical products produced in China for export to the United States. https://www.fda.gov