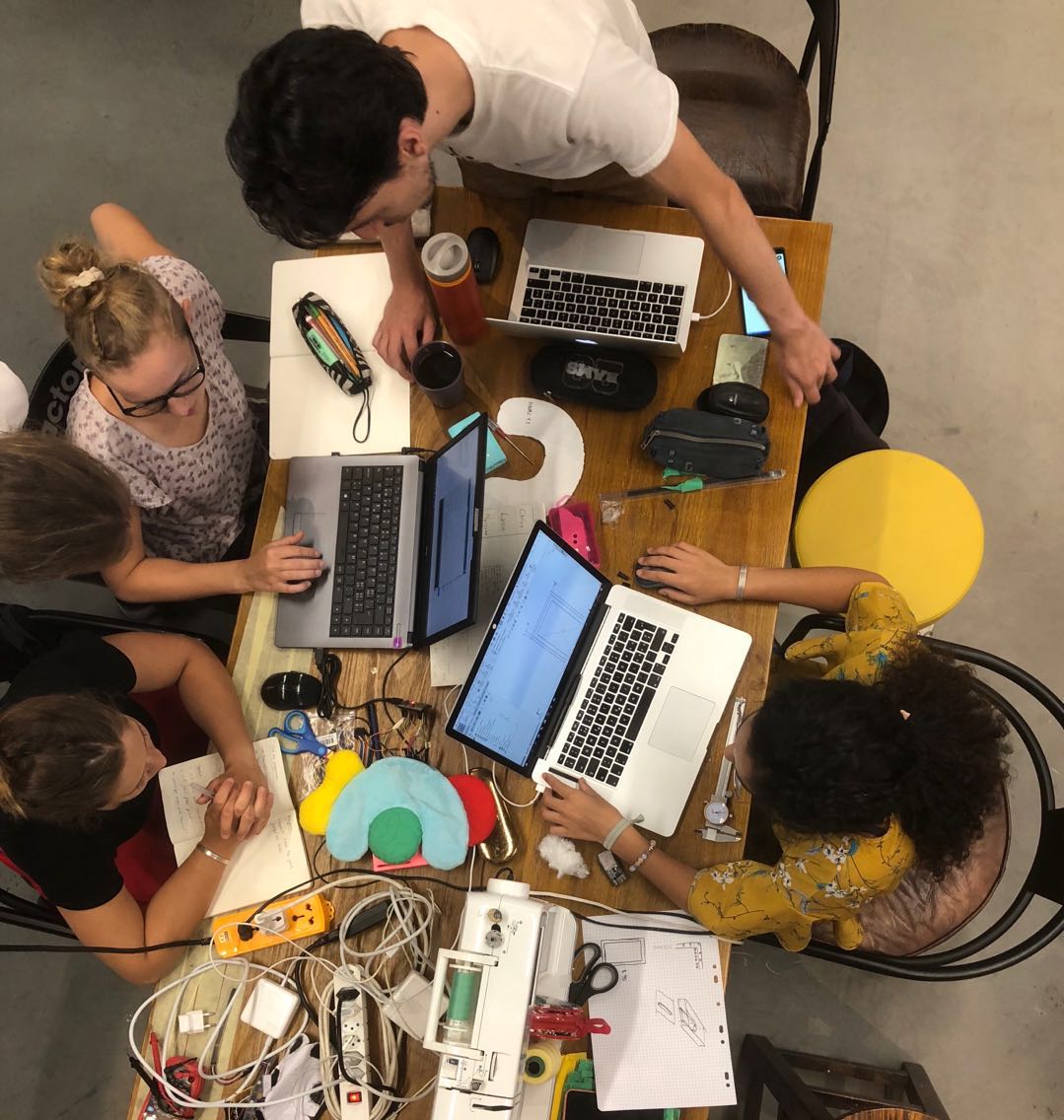 After this weekend and a sunday free of work, the five teams are back to work at X-Factory. The teams are very focused, as there are only 4 days left to finish the prototypes. We decided to ask each team 3 questions, to sum up their current situation and their daily plan.

We started with team Guido, who told us that their main task of the day was to send the PCB into production. This is important, as it takes at least 2 to 3 open days to be processed and arrive here at X-Factory. Moreover, they also wish to finish a first stable firmware for their connected keyboard. Meanwhile, the product designer will send to the CNC machine a mould that will enable them to pour the silicone for their interactive surface. Guido team seems to be a bit overwhelmed, though, by the quantity of work to be done, but stays motivated and very concentrated. Keep on going!

What about team Flowlin? The engineers of the team are still waiting for the PCB to arrive, in order to start assembling the components and finally get to test everything inside the prototype. This morning, they finished and sent the second PCB for the light part. The other team members are working on the pitch for tomorrow and the UX designer is trying to make a prototype for the app, to better understand the possible user interactions. Finally, Sandra wishes to get some feedback from Chinese workers to be able to adapt their product to the Chinese market. To this aim, she will ask some people working at X-Factory.

The team Toygether managed to make the LEDs light up inside their intermediary prototype of plush toy. One of their big challenges still needs to be handled: the capacitive touch sensors must work through the fluff of the toy, to allow a full interaction between the children and the toy. The pin-out board for the electronic development kit has been sent and should be manufactured by tomorrow. The industrial designer works on adapting the mechanical box containing the electronics. Meanwhile, the media interaction designer focuses on the video rendering of the materials inside the plush toy, for presentation purposes with the upcoming pitches. The software engineer enhances the design of the application. Congratulations, you are almost there!

The team Seeki sent to manufacture the 3D casing of their connected device. The stencil of the PCB has arrived, allowing their engineers to go and mount their electronic components at the Seeed factory. The media interaction designer works on animations of the mobile app. Additional components have been ordered and firmware functionalities are being revised in the code of their microcontroller. Their main fear is the possible critical questions that could be asked tomorrow, during the pitch with Sino-Swiss students. Let us wish them all the best!

The last team, Core, spends time debugging their electronics. The 3D casing of their weighter has been completely changed and ordered. The final prototype is planned to be finalized on Wednesday. Some software functionalities remain to be tuned to their last prototype. Both business students focus on the next pitch, while three of the engineers need to finalize their bachelor thesis about their project. Their main risk is that their PCB does not work. But do not worry too much, because they actually have a plan B, in case the troubleshooting would not bear fruit. They would then merge their previous PCB version with a development kit.

In the end, as you can see, all the teams are on the right track to finish their trip in Shenzhen with a minimalist working prototype!

Amandine and Simone, for the CHIC community.