During the whole CHIC experience we were working in or visiting places called Makerspaces. Makerspaces are places where people are allowed to make a bit of mess, it’s a very creative environment and it’s made for people who want to create, try and build new project without any pressure. Or that’s what we had in mind before coming to China.

X.Factory hosted us during our stay in Shenzhen for all the prototyping phase. We had our offices there and access to all the tools and machines to build our prototypes. We also went to visit TroubleMaker in Huaqiangbei to get another vision of Shenzhen makerspaces.
Then, once in Hong Kong, we visited to two of the most well-known makerspaces of the city: Dim Sum Lab and MakerBay.

We came to Shenzhen with an idea of makerspaces from western countries: a messy workshop buzzing with crazy projects, tools and machines all over the place. We were more than surprised to discover Shenzhen’s so called makerspaces: clean, neat and organised co-working spaces, covering massive office space and with relatively small workshops. 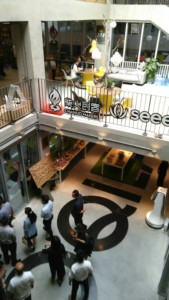 The Chaihuo/x.factory makerspace, where we spent 2 weeks bringing our projects to life

After spending two weeks at x.Factory and discussing with various makers and accelerators, we realised that our Western ideal of a “hobbyist maker” doesn’t exist in China: people simply don’t have the time for that. Quite on the contrary, Shenzhen’s makerspaces were focused on pushing projects from the prototype stage to production; a running joke among the makers is “what about your business model?” as not being able to make profit means not being able to survive in this extremely competitive environment.

The makerspaces in Shenzhen operate as co-working spaces where “makers” can rent a desk or an office for a given amount of time, and benefit from the makerspace’s facilities and coaching from “tech gurus”. Some makerspaces aim to bring projects from prototype to production, others hope to teach the newcomers about the Shenzhen manufacturing ecosystem, and some will just help if needed or even provide freelance engineers or designers as needed by budding startups.

We also visited the Troublemaker makerspace in Huaqiangbei, in the neighbourhood of the famous electronics market. They host many individual makers or start-ups in private offices and a few common working spaces, and have a couple of small workshops with laser-cutters, 3D-printers, soldering equipment and more. They do not receive government subsidies and have to run on a profitable business model to survive. They do not have “rules” for the people they host, and do not push them to go to the market with their projects, although many come to Shenzhen for this purpose. Troublemaker has some freelance Chinese engineers who offer their services to teams in need of some specific expertise. 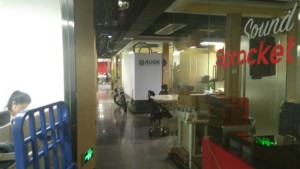 In Shenzhen, makerspaces are common as there are more than a hundred (but this is a difficult number to evaluate) all around the city, creating a great makerspace community. The reason why makerspaces are so popular is that the government is investing a lot of money to open makerspaces and support innovation. Companies benefit from tax rebates and government subsidies for opening creative and makerspaces, which are opened by dozens by real estate and tech companies, which also means they are not really for hobbyists and aim to be profitable in some way.

Makerspaces in Shenzhen seem to be “professional” more than “hobbyist”, operating as co-working spaces, startup accelerators which help start-ups with business models and large-scale production in the Chinese environment.

Under the “one country, two systems” governance of Hong Kong, the state is free to set its own laws. Hong Kong also has a government pushing for innovation, however, this can be seen through “official” organisations such as the HKSTP (Hong Kong Science and Technology Parks Corporation) rather than through makerspaces. In fact, makerspaces are quite new to Hong Kong with Dim Sum Labs, the first makerspace of HK, created in 2011.

Hong Kong posses few makerspaces, those places are community-driven hubs for anyone who wants to make something. It’s places for people that want to start their business, some artists that want to express their art, designers that want to transform their vision into reality or even some activists that are making some activities. We have visited two of most well know makerspaces Dim Sum Labs and Makerbay and have heard of a third one Three Key Craft Space.

Dim Sum Labs is a tiny makerspace (compared to those in Shenzhen) which focuses on building projects, taking things apart, and educating people and children about technologies. In this sense it felt familiar with Western makerspaces, as they had no focus on production or profitability. We went there to pitch our projects, and the team had some very interesting insights and suggestions about our projects, from a different perspective than from the investors or accelerators. 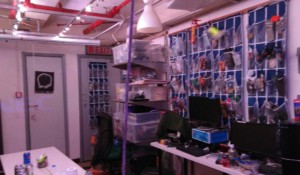 When we chose the “Makerspaces” subject to study between Shenzhen and Hong Kong, we didn’t expect to run into such a great divide from one city to another. We finished our adventure with the impression that Hong Kong have makerspace dedicated more toward hobbyists and students while it looks to be more about working in a professional way and launching start-ups in Shenzhen. If you want to prototype and iterate hardware it is definitely more adequate to do it in Shenzhen. However, if you would like to launch then a real business it can be good to move to Hong Kong.

Finally, we want to thank Hank and Hans from troublemaker, Violet from X.Factory, Brian and the team from Dim Sum Labs and all the other people who introduced us to the making environment in Shenzhen and Hong Kong!