All the teams gathered on Satruday at the EPFL+ecal Lab for the CHIC 2016 kick-off.

We started by covering the (numerous) weekly deliverables and the 3 milestones scheduled during the semester. To find out about the first deliverables you can go to the teams respective pages (Aimo, Heaböx, Okeep and Tikku) and discover the members and their project’s Minimum Viable Product (MVP).

Cédric Duchêne, who joined the CHIC team for this edition, gave us a brief introduction of the makerspace in which the teams will develop their prototype; together with Pablo Garcia Valle (also a new addition to the CHIC team), they will provide engineering support (both have a PhD in engineering) to the teams throughout the semester.

Stéphanie Missonier from HEC Lausanne introduced the participants to the Team Alignment Map (TAM), a tool to facilitate collaboration in teams. Teams were finally given time to work on their project’s MVP which they presented at the end of the day together with the roles and responsibilities inside the team.

Last but not least, a big thanks to all CHIC sponsors but in particular to Alex Wayenberg (in the Bay Area) who has worked behind the scenes until the last minute to make this kick-off a success and to Pascal Marmier (in Shanghai) – without them CHIC wouldn’t be possible. 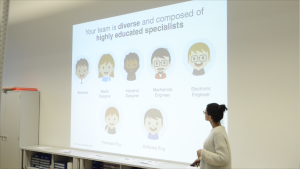 Stéphane Missonier speaking about the intricacies of collaboration among interdisciplinary teams 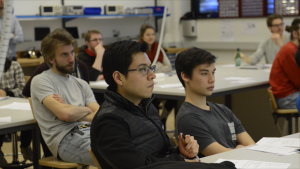 How to captivate students on a Saturday afternoon…