As the semester reaches to its end, the Hibachi is finally taking shape. After though some trouble with the experiment, it’s finally solved! (Until the next problem)

In contrary to our first idea of designing a PID to control the temperature, we decided to implement a bang bang controler. This controller is turning on and off power of the heating pad to  keep the temperature in an interval around the target.

And the result is… 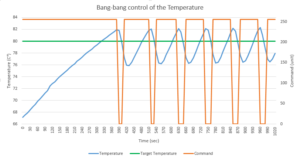 Tommorow is the last Milestone, and we are prepared to show you what the Hibachi team can do. So get ready!