Milestone 2 went well but we are waiting for the feedbacks. We will keep you updated about that next week !

About the positioning here is where OKeep would be:

OKeep is THE connected helmet for commuters, especially in urban areas. It is a high quality product with a great design. Compared to its two direct competitors, Lumos and Torch, OKeep is more connected (thanks to the audio and the app) and has a better image of quality as it would be more expensive. Indeed, those two brands sell their helmet for 140$ but we would go on a higher price. 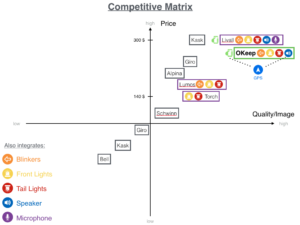 The vision of OKeep is focused on safety but also on the connected aspect. That is why we would play both cards: lights and blinkers bring visibility and the audio and the App would add value.

Two very important concerns of OKeep is the design and the handiness. People often don’t wear their helmet because it looks ugly or because it is bulky.

On the electrical engineering part, with the changes in our MVP, quite a bit of the electronics has changed. We should be able to get a prototype by the end of next week! Hopefully there won’t be too many mistakes in the design!

On the application side, the navigation is up and running, though still a bit laggy. Now we need to make it connected to the helmet to stream the audio into it.