Drumroll…. Our Aimo connected device starts to take shape in terms of electronics as well. We designed the first testing board using Altium Designer and we sent it to fabrication at Seeedstudio in China.
We received it last week and we got very excited about the quality. Next week, we plan to solder all the components on it and test our firmware that was written for the prototype version.

Some features that our PCB contains:

During the interviews performed by Sara, we received many requests to track the letters inside the mailbox and annouce them if there is mail inside. However, we already anticipated this requirement, such as our PCB contains a phototransistor-LED system  that has double role: check if the door is closed and count the number of letters.

Last but not least, we did some more detailed calculations on our power budget, and guess what? With the feature to keep the MCU in power down mode (consuming about 500 nA), we are able to power Aimo using a LiPo (7.2Wh) for 1 and a half year!! This is really amazing, because our users shall not stress about charging Aimo anymore.

We will keep you posted as soon as we solder and test our PCB!!! 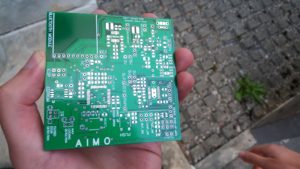