Not all the teams were in their best shape after the late night of day 11 but this day was not one allowing procrastination. The amount of students dressed in pink soldering components proved that many students from different backgrounds had capabilities to help their teams out of their own field of studies. OKeep was in a rush to make a PCB work after so many problems with components, 3D printings, etc. so we had to leave Victor and Patrick behind when everyone left for the humanitarian hackathon at ShenZhen Open Innovation Lab (SZOIL). Luckily, they managed to make two PCBs work that evening after we left.

The hackathon was in collaboration with local students, so the first activity after a few presentations was designed to make us meet each other and interact informally. We were given time to talk by pairs and the local students gave us chinese names. While Max was baptised “Electrical Noodle” and Damien “Big Clothes”, I received the name of a flower that refers to “clever and beautiful” and also the color blue. Also, Adrian was called “Safe Heart” by his female partner. 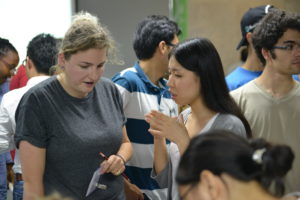 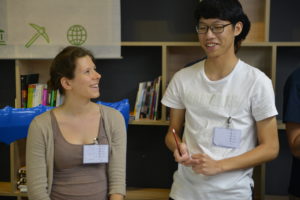 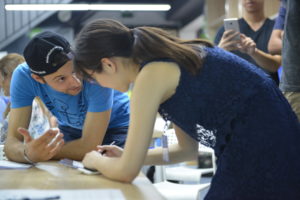 According to our preferences and competences, we were then split in teams to work on different challenges. The first challenge was to design patient tags or body tags that would be both human and machine readable and would be robust enough for use in difficult environments. The second challenge was to imagine a treatment reminder also for patients in areas where the ICRC is active, so taking into account the social and environmental context. The last challenge was to explore the possibilities to improve crutches in order to allow people who need to use them to live a more normal life. The teams of three to five people were supposed to include members from a variety of backgrounds and origins.

After some time to brainstorm alone and then in teams, we had our first video call with the people from the ICRC so that they could give us more details, answer our questions and give us feedback about our first ideas. The interactive “tamagotchi-like” pill dispenser my team presented made them laugh but they liked the idea. Other interesting ideas were suggested such as crutches with mechanical systems to change height and position. 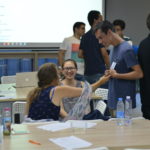 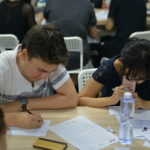 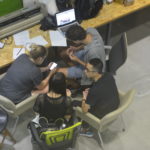 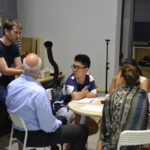 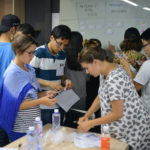 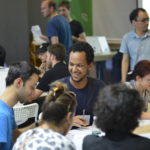 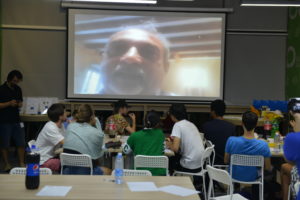 Oh, and guess who we came across just when we left SZOIL ? Victor and Patrick who took almost 2h to come from Seeed to SZOIL with various taxis and metros. But at least, OKeep has two working PCBs now !